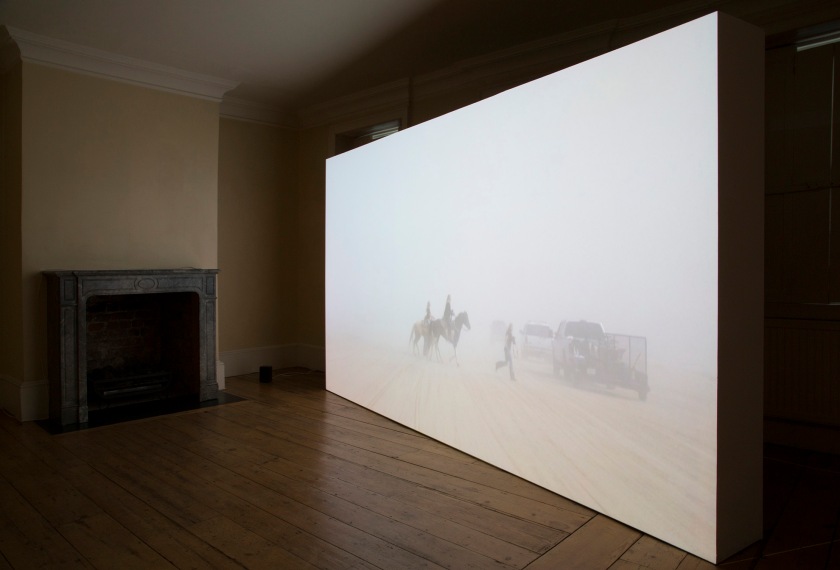 Off Road looks at the implementation of the notion freedom in the United States and how it is manifested in a unique relationship to landscape. The multi-channel video installation explores freedom as a construct that is instrumental in sustaining the political system that houses it. Central to this is a probing of the boundaries between documentary and fictional filmic and photographic languages.

Off Road was shot in a landscape of Sahara like sand dunes which is also a state vehicular recreation area bordering on a nature reserve. On a weekday the location is fairly empty. Over  week end thousands of users arrive in their RV’s, SUV’s and self built motor vehicles. The main focus is driving these vehicles in the deep sand of the the dunes.

On the one hand The Sate Vehicular Recreation Area plays a significant role in creating a sense of community, a temporary city that joins people from distant backgrounds through their shared interest. Many of its users claim that it cuts through class and social boundaries. Juxtaposed to this is the problematic issue of the contested ecological impact of the activity that results in a constant threat of closure. Below the surface of the event rests the underlying paradox between the amount of energy and resources invested and this seemingly futile activity

Alongside this the location encapsulates a remainder of a pioneer spirit; a sense of entitlement and claim to land that has defined and shaped this region of the world. Except now there is no more new land left to claim. Here we are already at the edge of the Pacific Ocean. There is nowhere left to go but elsewhere to claim new land.